Rainwater is flowing through the old metal drain pipes hanging off the cement eaves I saw yesterday as I sat under the trees in the garden having dinner.  The bell at St. Peter’s Basilica just two blocks up the street is chiming 4:30 AM.   As I lay snuggled in the strangely comfortable bed in a high ceiling room with an old musky smell,  I hear the sighing of a yawning dog somewhere on a patio followed by a momentary schreech of a cat.  The sounds of early morning in Rome.  All is so still except for the movement of my breath. It is very quiet with only the constant dripping and gurgling of rainwater falling through old pipes, and an occasional thunder somewhere in a distance, as a storm seems to be passing through the Eternal City.

Why are these sounds so familiar?   A homely peace and comfort surrounds me like I have lived here before.  Less than 12 hours ago I arrived in Rome, and my heart rejoiced.  As I walked the cobble streets I searched the homes on the hillside looking for what?

I want to embrace the city and have already taken almost 500 photos.  Perhaps it is my love for the historical novels about the ancient Romans and their rich and lively culture with its  rudeness and crudeness.  Perhaps it was the audacity and arrogance of a church that dragged a world through a personal and social revolution to recognize and face its Creator by any means necessary, perhaps losing some of its soul to save humanity.

I can’t put my finger on the magic, the mystic.  The intrigue.  All I know is that I’m here.  Rome!  The struggles of the human story surround me and I drown in the epitomy of human drama, triumph and sorrow.   The scars of past triumphant days  proclaim a time of complete and total expression when man looked into the soul of heaven and grasped images too large for life and molded them into gigantic decorative pillars; some constructed in the first century still stand magnificently.  The statues, colorful paintings grace the high expansive ceilings of the domed basilicas for the human eye to see God’s expressions; man’s attempt to portray the human-ness of the divine, and God’s willingness to gift mankind with His creativity; God’s powerful thoughts and images placed in the hands of man.

In fleeting moments I struggle to fathom the capabilities of man’s intelligence and skills; the immense effort, commitment and dedication put into converting stone and marble into human images, and blank canvases into colors of light, love, life, doom, happiness, and sadness.  The human story, recorded in stone, on canvasses, in clay potteries, in flying buttresses, glasswork, while our literature overflows with myths, heresies, speculation and silent tombs.

A gifted humanity!  Why do we still have wars?  The question hits my brain with an echoing gong.  Such a sorrowful waste of human talent and God’s existence in man on earth.  God can and does mighty things through humankind!  And through the gifted talents of the ancient artists, God reveals Himself through the ages.  And He is not done with us yet.   A thought burns in my mind, “We are again approaching the corner to a new age and time.”  I close my eyes and search diligently for men and women of my day who are helping humanity turn the corner safely.

What a laborious thought.  I open my eyes, roll out of bed and peer out the window.   Ah, Roma!  I had my first authentic bruschetta sandwich made by real Italians yesterday for an early dinner.  I was so famished because the last  meal I had was on the plane over 24 hours ago enroute from Philadelphia to Rome, a small bowl of pasta and a leafy salad.  The bruschetta was a huge sandwich with large slices of fresh mozerella and juicy tomatoes garnished with basil leaves and potato chips on the side.  The crustless toasted bread covered nearly the entire plate and I left just a little slice of bread and tomatoes to let the chef know that I had just the right amount to eat.  It was served with “still water” as opposed to sparkling water.  The meal satisfied my hunger and made my day.

Two things I did yesterday that symbolized what Rome does to a person:  one, I climbed the steps to the cupola of St. Peter’s Basilica.  It was over 300 steps in crunched tight quarters.  So tight that I placed my hands on the walls on both side of me as I climbed for balance….and at one point a rope hung so I could pull myself up, step by step.  The steps, literally,  are less than 8 inches wide.   Someone humored that it probably  was built by and for monks either as punishment or a way to focus on their meditations.  Whatever!  By the time I reached the cupola I already dreaded the walk down, which, although easier, was just as grueling on my knees.  When I finally walked down the wide corridor onto the terrace at dome height, still well above and behind the statues that grace the top of the Basilica’s roofline, I felt that undergoing the intense physical and emotional experience was my pennance for whatever wrongs I had committed in life!!  I searched my mind and couldn’t find another comparative experience.   It was an achievement.

Two, I attended Mass after my climb to the cupola.  A fitting event after a humbling experience.  A balancing moment in life.

It is now 5 AM.  I’ll continue to rest and look forward to my visit to the Vatican Museum and Sistine Chapel at 11:00 AM.

No special closing words.  Just listening to the sounds of Rome awakening with the rise of the sun.  Sounds like street washing???  I hear some kind of a water pump running.

Oh, Roma, I am enthralled by thee. 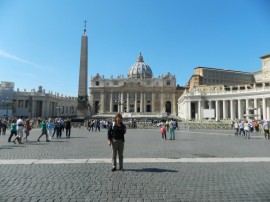